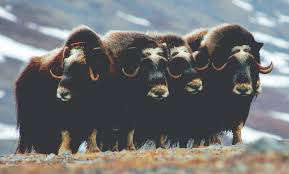 Juneau, Alaska (KINY) - In July, 56-year-old Paul Dewitt Atkins agreed to a plea agreement for illegally harvesting a musk ox from Kotzebue on a subsistence permit.

Atkins claimed Alaska residency when he was a resident of Oklahoma and he failed to destroy the trophy value of the animal in the field. Atkins has worked as pro staff for hunting and outdoor gear companies.

Atkins pleaded guilty to one count of failure to comply with hunt permit conditions, one count of false information, and one count of illegally transporting game, all misdemeanors. Atkins is ordered to pay $12,000 in fines and $3,000 in restitution with $23,000 in other fines suspended. Atkins' Alaska hunting license is revoked for three years, and he is on probation for three years. Atkins also forfeited 20 taxidermy items that were seized during the investigation.

A tier II subsistence permit is rare to get awarded as it’s a limited number of permits based on a point system that prioritizes rural Alaska residents.

“Mr. Atkins, I appreciate you taking responsibility for this. You are an experienced hunter and understand the consequences, I doubt I will be seeing you here again,” said Magistrate Smith.

In August 2021, the Alaska Office of Special Prosecutions, within the Alaska Department of Law, charged Atkins with 12 counts of hunting regulation violations. Assistant Attorney General Ronald Dupuis prosecuted the case.

During the multi-month investigation, it was revealed that Atkins had harvested nine musk oxen on Alaska resident only Tier II subsistence permits. In addition, Atkins, on numerous occasions, failed to comply with the requirements of the permit, which required destroying the trophy value of the animal or cutting the horns within two inches of the eye level prior to leaving the site.

Further investigation revealed that Atkins was claiming residency for hunting purposes in both Alaska and Oklahoma. In coordination with the Oklahoma Department of Wildlife Conservation, Atkins's primary residency was determined to be in Oklahoma. Troopers determined that Atkins had harvested at least 29 different animals in Alaska with an Alaska resident hunting license.

The incident was investigated by the Alaska Wildlife Troopers with the assistance of the Cherokee Nation Marshal Service and Oklahoma Department of Wildlife Conservation.