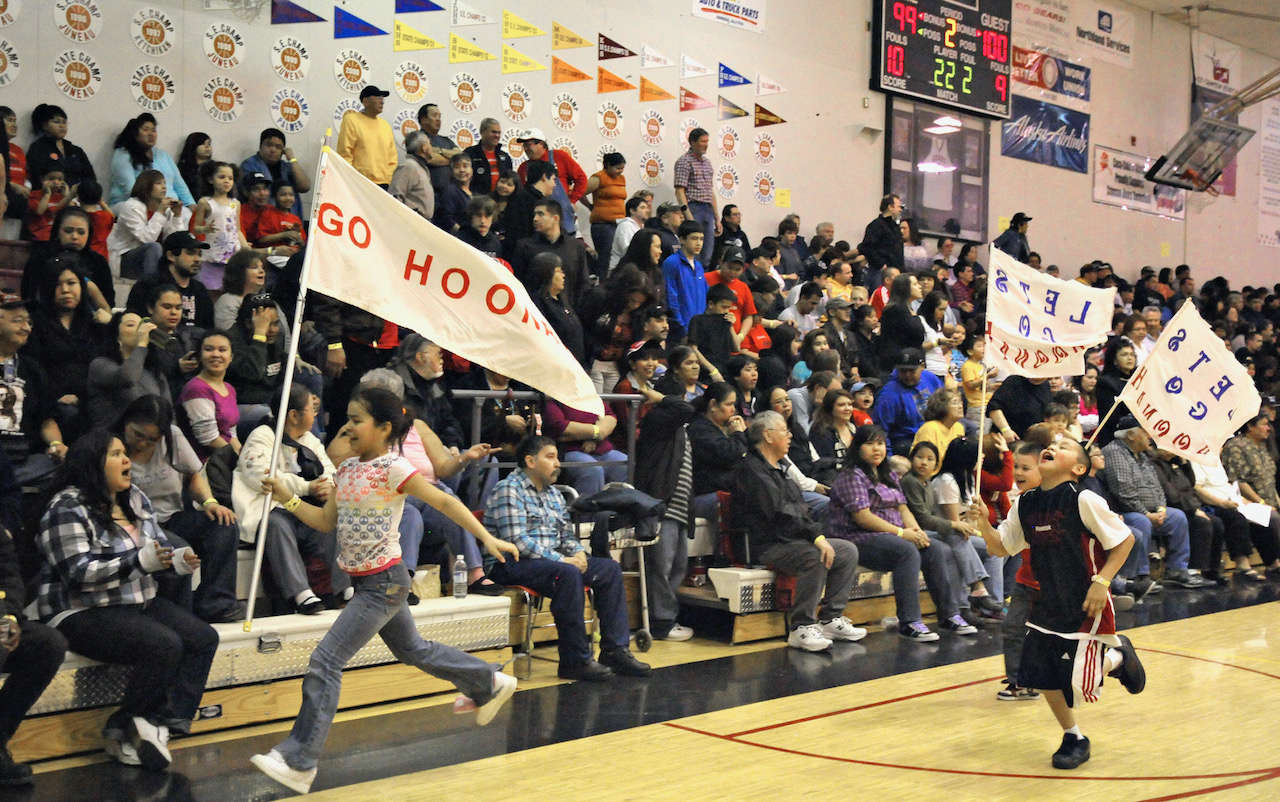 Huna ANB fans Jonna George, Brandon Jack, and Jaeden Paul lead the crowd in a cheer by running with flags along the court during the 64th Annual Gold Medal Basketball in this 2010 photo. (Klas Stolpe)

Juneau, Alaska (KINY) - For the third consecutive year the Annual Juneau Lions Club Gold Medal Basketball Tournament has been canceled due to the uncertainty of the coronavirus pandemic and the economic difficulties it has caused for supporting communities and concerns for the safety of those attending.

“Not having enough people to attend plus the COVID still going rampant,” Juneau Lions Club President Edward Hotch said. “When it first came down in the states it took like two to three months to get up here. And with the new one starting down there we figured two to three months it would probably be up here. I heard already that they had that new variant in California yesterday. If we have the tournament and people show up but not enough people to fill the gym then we don’t have enough money to put one on the next year.”

This would have been the 74th Gold Medal tournament and the week-long event is typically a major fundraiser for the Juneau Lions Club to provide economic support for communities in need throughout southeast Alaska and student scholarships, and other Lions Clubs International needs throughout the world.

“Our finances are pretty tight right now,” Hotch said. “So we are not doing as much help as we used to but we are still trying to help somebody every year with what limited resources we have. The majority of our funds come from the fundraising games, that’s what it is for. It is a tournament to fundraise and then all that money goes to the communities that participated. Each high school student in their school that applies, one student per community, gets a thousand dollar scholarship. And we give it to Helping Hands, AWARE, you know, all the local places that need help.”

The Lions Club had looked at the option of live-streaming the tournament.

“But a lot of people locally said it was more fun to be there to watch and be able to yell than to watch streaming,” Hotch said. “And who's saying anybody wants to pay for streaming? Maybe one person will pay and 50 people will go to their house and watch it, then we are losing money.”

Founded in 1947 the event is more than basketball, becoming a gathering point for communities throughout southeast Alaska and in a few instances villages from farther north. It has become a community cultural bonding event where old friends can chat, and cheer, while watching younger generations play on the court and where traditions are shared in the gymnasium lobby and in halftime entertainment.

“Another issue is that a lot of the people who come now are older,” Hotch said. “And we just have to protect our elders because they are going to be the ones that are probably taking off their masks because it is going to be irritating to them to talk to their friends and it is not worth it to lose a whole bunch of people when we know we can just wait and be safe next year.”

“It’s tougher for the teams to raise money, especially small communities,” Hotch said. “People have limited resources. And I looked at the ferry schedule and there was no ferry for Angoon the week of Gold Medal, there was one ferry for Hoonah that left on a Tuesday and went back on a Thursday so the ferry schedules didn’t work very well for us either.”

Hotch also noted many communities had not opened their gyms so people could play and practice.

“If you are not practicing it is not going to look good on the floor if you are struggling to get up and down the floor because nobody got to be able to get into shape,” he said.

The major obstacle for next year, aside from COVID uncertainity, is just reserving the Juneau-Douglas Yadaa.at Kalé gymnasium.

“Everything else is in place,” Hotch said. “We have money for startup fees. We already had trophies ordered from the past cancelations. We’re pretty set for a tournament. We just need to be having where it is not going to be a hinderance to anybody to come and be safe at our tournament.”

The month of November is when the Lions Club takes letters of interest from communities wishing to participate.

“We have had quite a few people inquire on both sides of the issue,” Hotch said. “Some want it and some don’t."

The late Reverend Dr. Walter A. Soboleff, one of the tournament’s founders, said the importance of the Gold Medal Tournament was not in the tournament games themselves but in the pride it gave to communities who participated.