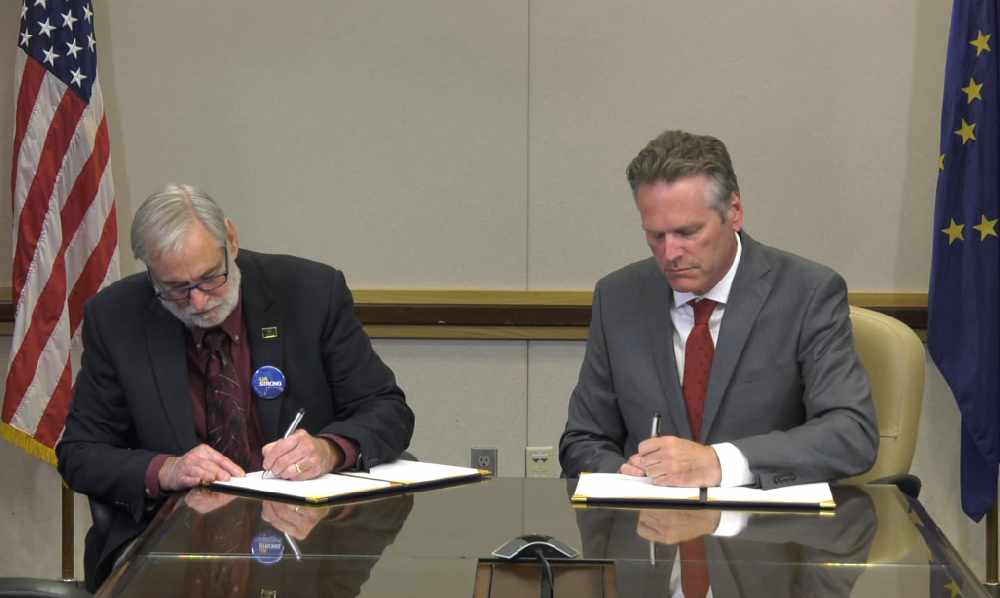 UA Board of Regents Chair John Davies and Gov. Mike Dunleavy sign the compact on Tuesday.

Anchorage, Alaska (KINY) - The University of Alaska and Gov. Mike Dunleavy have reached an agreement on a multi-year compact that preserves $110 million in state funding for the university for Fiscal Year 2020.

The move will reduce UA’s budget by $25 million for the fiscal year that began July 1, 2019. The agreement also means that budgets submitted to the governor by the Board of Regents over the next two fiscal years will reflect $45 million in additional reductions.

The compact was signed today by UA Board of Regent Chair John Davies and Gov. Dunleavy.

“This agreement, worked out following a number of budget discussions by the Board of Regents, provides a clear, gradual multiyear year funding glide path,” said Davies. “Most importantly, the supplemental operating budget provides much more certainty and confidence for our students, staff, faculty, and the communities we serve.”

“As an educator, a father, and a graduate of the University of Alaska, I believe in a strong university,” said Governor Dunleavy. “I also believe we must balance state support for the UA system with the very serious fiscal situation we face today. This agreement, which comes after extensive conversations and work with the university, is an honest attempt at balancing both realities. By choosing a multi-year, step-down approach, we provide our communities, campuses, and students the certainty they’ve been asking for, while also taking on the serious challenge of reforming the university into a more efficient system. I thank both the UA Board of Regents and university President Jim Johnsen for engaging on these difficult discussions and for endorsing this three-year agreement.”

The agreement includes a multi-year step down in funding. In FY20, the budget will be reduced by $25 million in state general funds from the current level of $327 million; in FY21, the university would see another $25 million reduction from the state; and, in FY22 another $20 million cut in state funds. The total amount of reductions between now and FY22 would be $70 million – about half of the $136 million originally proposed.

“A $70 million reduction, even over three years is a serious reduction. It will require careful review and streamlining of administrative structure, academic programs, and services to ensure that resources are focused on student access and achievement,” said UA President Jim Johnsen. “But by restoring the legislature’s appropriated funding for this fiscal year, and by spreading reductions out over the next two years, the required restructuring can be done more methodically, with less impact on students.”

Discussions regarding the three-year “compact agreement” between the governor and the university began in earnest after the July 30 Board of Regents meeting. UA leaders and the Governor’s office met multiple times to create a path forward that allowed reductions to be split over time, rather than a severe, one-year budget cut anticipated for this year. Discussions focused on a budget scenario that would support the university’s mission and its strategic goals and outcomes – economic development, workforce development, research, educational attainment, and cost-effectiveness.

“While it has been a long and sometimes contentious process, and we did not necessarily see eye-to-eye on all issues, everyone involved in the talks understood that an agreement must be made and actions taken to preserve the University of Alaska under the legislature’s FY2020 funding,” Johnsen said.

The agreement can be found at gov.alaska.gov/wp-content/uploads/sites/2/8.13.19-UA-SOA-Compact.pdf.