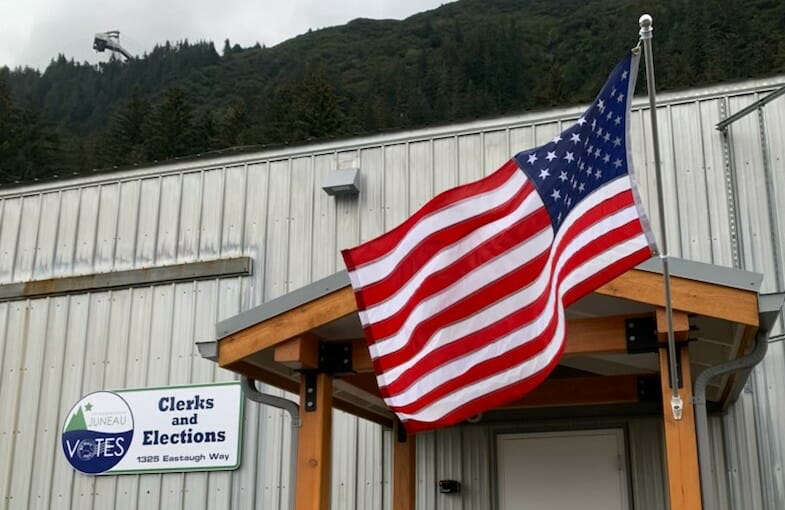 Juneau voters will be asked 4 ballot questions this year. Proposition 1 asks voters whether to approve a bond package for a new city hall at 450 Whitter street. Assemblymember Wade Bryson spoke to that on Action Line.

"The bond package is for $35 million. We've already taken $6.3 million and allocated that as a down payment. So we're doing this as responsibly as a homeowner trying to purchase their first home, we've just added two zeros to it, essentially," Bryson said. "We have a down payment. We have a real need. We're going to bring the satellite offices under one roof so we'll have not only the efficiencies, but I was thinking of the benefits. So when a citizen needs to deal with City Hall, right now, if you have a complicated issue, you want to have to go to four buildings. That's absurd. We do this correctly at 450. Whittier."

Proposition 2 asks whether to approve to bond $6.6 million for maintenance and improvements to Juneau's trails and parks. Juneau Park Foundation Board Member John Pugh spoke in favor.

"One of the really big things about attracting people to the community is to have a good quality outdoor recreation, and parks," Pugh said. "I think this is something that's important for the community, so I hope they think about that, this is about quality of life and about attracting people here and keeping people, retaining people here in our employment system. We're having trouble getting people to employed in Juneau right now and it's really important to have a quality community."

"That money goes to mostly capital projects, and a lot of its deferred maintenance for city facilities, school district facilities, improvements at docks and harbors, maintenance and Parks and Rec. And then even some programs like childcare and some infrastructure for our police and fire," Smith explained. "Super critical to extend that there may be things in there that a person may not like, that's fair. I think we need to all be looking at the big picture and realizing that's a really important funding stream for our infrastructure."

Proposition 4 is asking Juneau voters on whether to repeal the city's mandatory disclosure ordinance. A yes vote would repeal disclosures, a no vote would keep it in place.

Members of the group Protect Juneau homeowners privacy spoke on action line about the ballot question. Southeast Board of Reality President, Tonya Moser, advocated for a yes vote.

"I think if you vote yes, on proposition 4, I fully expect this to continue as a discussion point, but I think the deeper issue is, if you believe that we need to overhaul how we look at housing, great, let's do that, but let's call in the people that deal with housing on a day to day basis. One of the biggest issues that I have with the vote no is, it's sort of pointing back at realtors and saying, you know, oh, 'these realtors are trying to keep this information just to themselves.' That's not the case at all."

Chair of No on 4, Jay Nelson, says voting no is about transparency.

"If someone is interested in buying or selling a home, the only source of information about prices is going to come to the realtors. If anybody wants to sell their home or buy a home by themselves without a realtor, it's very difficult to do because you will have no information about home sale. So I would say if people are interested in having more information and more transparency in how in the purchase and sale of homes in Juneau, they should consider voting no on prop 4."

Voters can still turn in their ballot at one of the two drop boxes located at the Douglas Library/Fire Hall or the Auke Bay Statter Harbor Parking lot by 8 p.m. on the 4th. They can also place a stamp on it and mail it by Election Day.

Or, Drop it off at either City Hall Assembly Chambers, or the Mendenhall Valley Public Library.

According to a Friday press release from CBJ, the new CBJ Ballot Processing Center off Thane Road processed nearly 4,000 ballots to prepare them to be opened for counting beginning on Election Day.

Out of those 4,000 ballots, the city said just over 100 voters have been sent cure letters identifying one or more issues with their ballot envelope that must be addressed before the ballot can be approved for counting. Additional cure letters will be sent out between now and election certification, scheduled for the week of October 17.