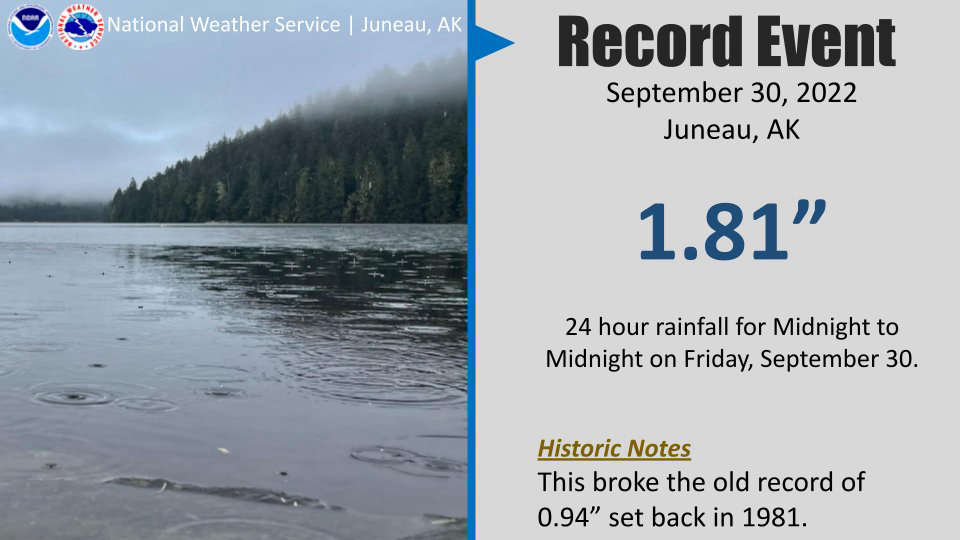 Juneau, Alaska (KINY) - Rick Fritsch, one of the lead forecasters and the climate focal point for Southeast Alaska, National Weather Service Juneau summarized one of the wettest months of the year, September, with temperatures, rainfalls, and trends.

He continued on to Juneau's September monthly rainfall.

"In terms of rain, and that's really the big story. Our monthly accumulation at the airport was over 11 and a half inches. As a matter of fact 11 and two-thirds inches of rain for the month of September, normally 9.15. And I should probably also state that September and October are our wettest months of the year. So the fact that we had a significantly wetter than normal September, our wettest month of the year, one of the two, is a big deal. We had, for the most part, normal rain for the first week of the month. And then things kind of got flat until we got to the 14th of September, and then we started to rain again, and then it turned off again. And then it was not until the 20th where it started raining and it continued to rain all the way through the end of the month, which put us over the monthly high. Granted we did have more rain than normal for the month of September. It's also important to realize that the record is actually quite a bit more than what we actually got. The highest monthly rainfall for the month of September was way back in 1991, where we got over 15 inches of rain as compared to the 11 and two-quarters of an inch that we just got this past month."

Fritsch detailed what this year is shaping up to be when it comes to rainfall trends.

Fritsch is looking on the positive side when it comes to the rainy 2022 Juneau is having.

Fritsch commented on this upcoming winter.

"Two La Niña winters back to back, it's not extraordinary, but it is not normal. Usually, we have a La Niña winter and then maybe we'll have an ENSO El Niño, La Niña, neutral winter, followed by maybe an El Niño or an ENSO positive winter. Maybe a couple or three of those before we go back actually to a La Niña or ENSO minus year. But this year, it's almost at this point a slam dunk that we're going to have another La Niña winter with cooler than normal temperatures."

He added that although the winter is predicted cooler than normal, that doesn't necessarily mean there will be more snow.

Fritsch noted that full September statistics will be available on the website soon.

"Everybody keep your eyes peeled for the webpage. We're going to be coming out with the September statistics here very soon, as well as on the weather, the very front page, there'll be a graphic that shows both temperature trends compared to normal, as well as precipitation trends compared to normal for numerous Southeast Alaska cities. And they can see that on weather.gov/ajk or slash Juneau."