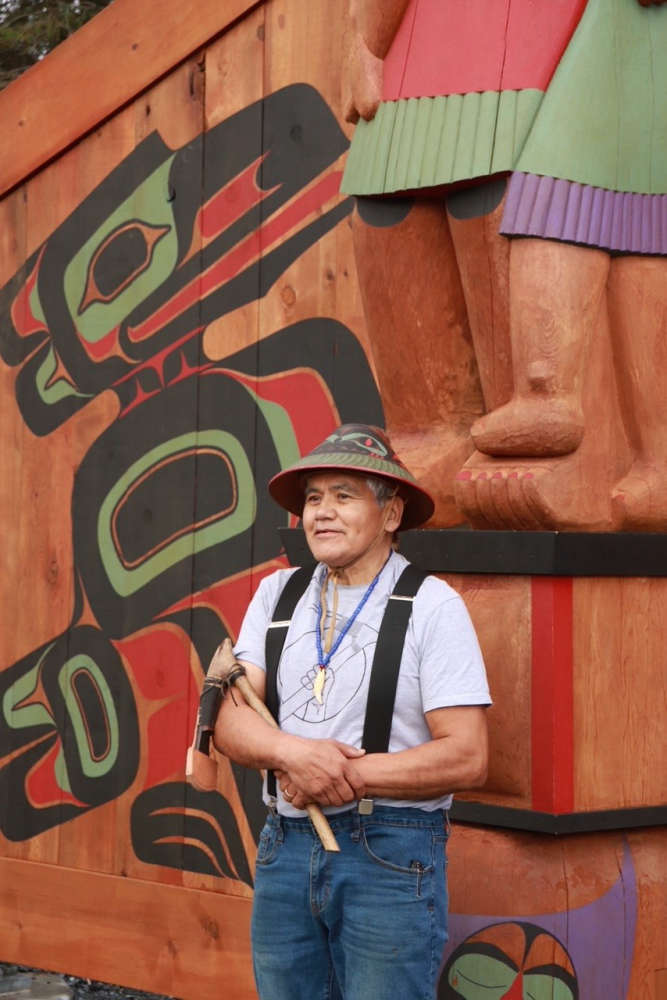 Kaasei Satú is to remember missing and murdered indigenous women, and all survivors of sexual and domestic violence, a project in coalition with AWARE, Tlingit & Haida, the Wooshkeetaan, the L’eeneidi A’aakw Kwa’an, and CBJ.

The 22-foot totem pole is located at Twin Lakes in the frontal part of the parking lot.

AWARE Executive Director Mandy Cole talked about what Kaasei Satú means to her as a community leader.

"Today's a day for feeling and seeing the connection between all of us, as survivors, as mothers and fathers, as humans. When my son was little, I used to tell him that there was a tiny, fine, impossibly strong golden thread that went from my heart to his heart. And it meant that we could never truly be separated and we would never truly be alone. And what I see today is a web of those threads between all of us, building the softest, strongest safety net that you can ever imagine. And we will hold the people in this community who are in danger and who are in the middle of their own storm. We all deserve beautiful places, full of spirit and healing that will fortify and strengthen these heavy hearts. We'll learn more about this Kootéeya and the love that went into it and flows out of it. So please take a minute to think about the survivors in your life. As well as those we've lost and may this Kootéeya be one more light, the little light that we all need to heal ourselves, our family, and our community."

Kootéeya is the Tlingit word for totem pole.

Cole said that CBJ was there every step of the way through the seven years it took to get this project moving.

"This is a healing totem pole and screen for victims and survivors of gender-based violence and missing and murdered indigenous people. In 2010, the state conducted a victimization survey in the City and Borough of Juneau. It found that over 50% of women have experienced domestic or sexual violence in their lifetime. This is violence that is 100% preventable, that needs to be named and challenged because it's unacceptable at every level."

After the opening remarks, cry songs were performed to express grief. 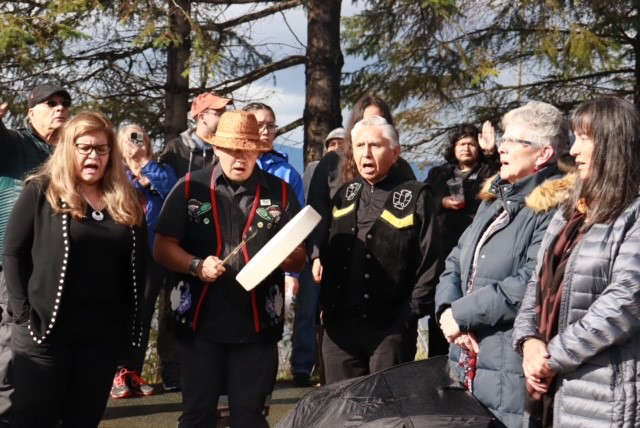 Above: A 'cry song' to remember missing and murdered indigenous women. Below: A release of grief ritual to stomp out 'big feelings', as put by Folletti Cruise. 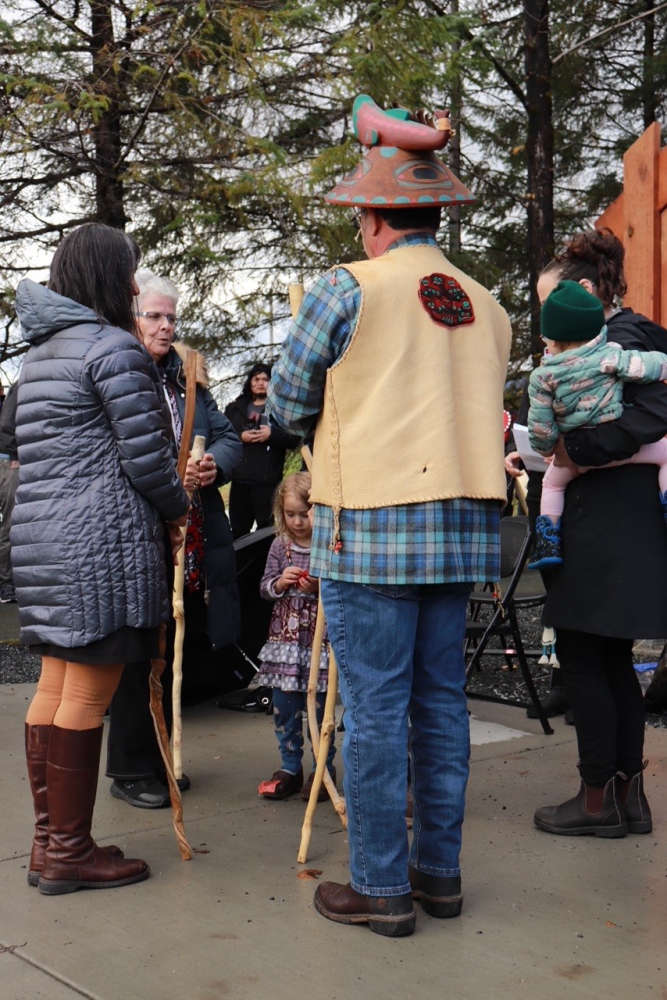 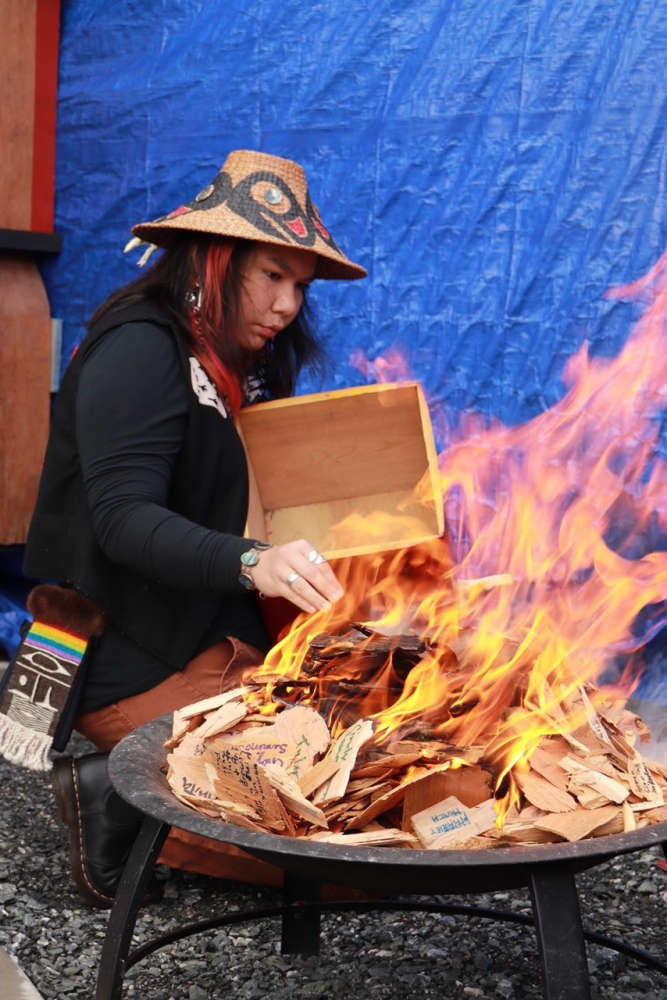 Above: Names of people lost to gender-based violence or survivors are written on wood chips collected from Kaasei Satú, and burnt in a Fire Dish Ceremony. Below: Harborview Elementary School's Tlingit Culture Language and Literacy Dance Group performed, bringing hope for new generations to come. 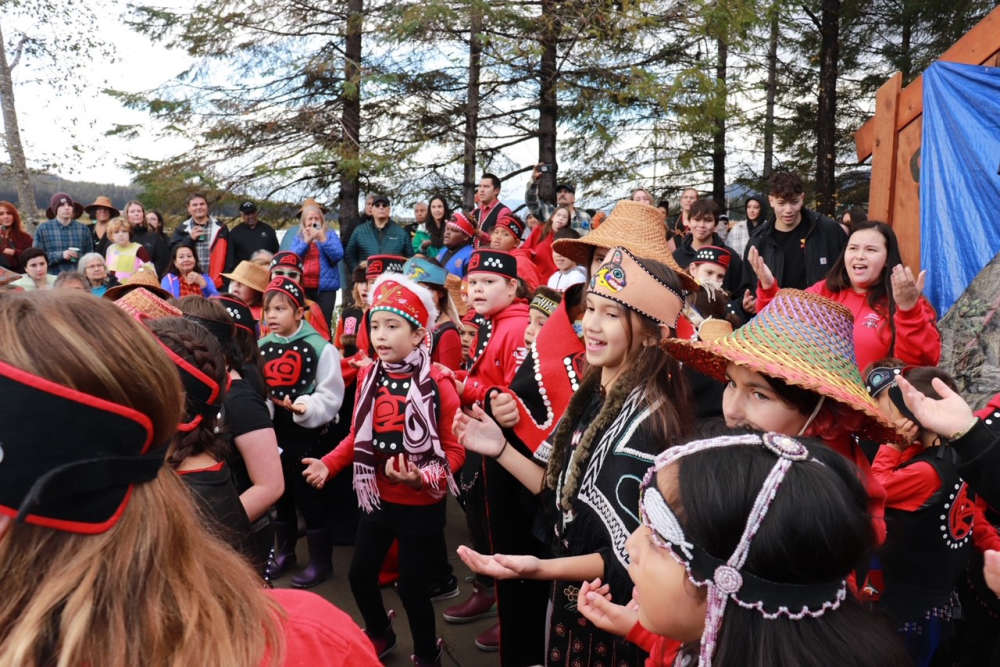 A naming ritual for Kaasei Satú was followed by the well-anticipated moment of the uncovering of the totem pole. 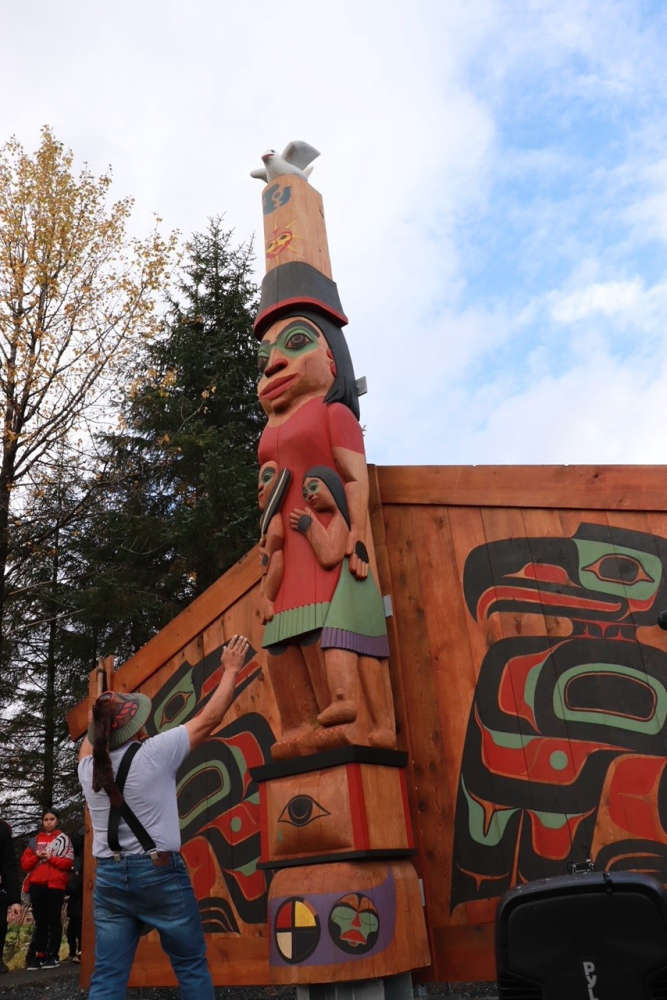 Price talked about the story behind his project.

"Perseverance would be a good word for this project. Team effort, and then the wood carver. There's also a lot of help from my wife, Cherri, and from Sarah. The screen on the back and the totem in front is something I've always wanted. Here it is. You see, an eagle and a raven on each side of the screen, which also belongs to everybody. Domestic and sexual violence belongs to everybody. Healing belongs to everybody."

Price talked about the different elements of his carving and how they created the story.

"The circle's broken. Hopefully, someday we can close that circle. An eye with a tear, trail of tears, domestic violence, and sexual abuse. This is a box of tears from everybody. Going further up, we have the mom, the eagle feather that she's holding. That's her voice. So many times in so many places, you don't have your voice. Now you have your voice. Then we have light, the sun for hope. At the very top is the dove. Brings peace, peace to all of us." 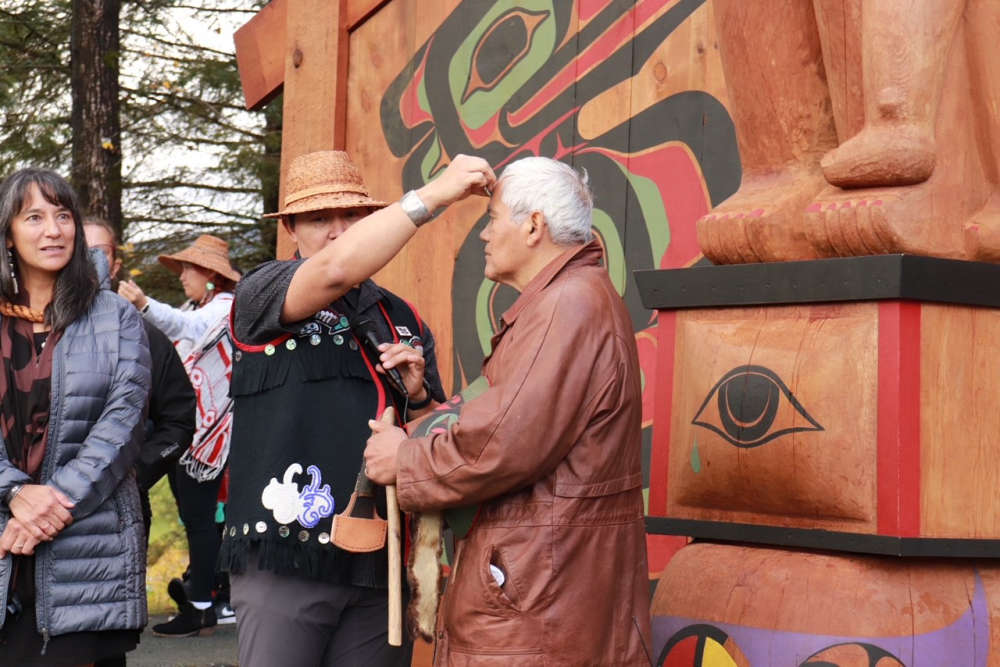 Above: Price receives the name, 'Kaajis.yoodzi.áxk' (it echoes back for the people).

The name was gifted to him for the carvings he creates for other people in need.

Price commented on the wood chips used for the Fire Dish Ceremony.

"Each chip that comes off this totem is a life taken by domestic violence or sexual assault. The creator told me there still wouldn't be enough chips after I was done."

Price explained his carving dance that was performed at the end of the unveiling.

"We're going to end this with a carver's dance. As the artist to this project I hold title to this artwork. Until I do this dance, I do this dance when I release it to the world. And after that, it all belongs to you."

A healing reception was also held Saturday evening at the Elizabeth Peratrovich Hall.

Below: Master carver Wayne Price dances a carving dance to release his creation to the community of Juneau. 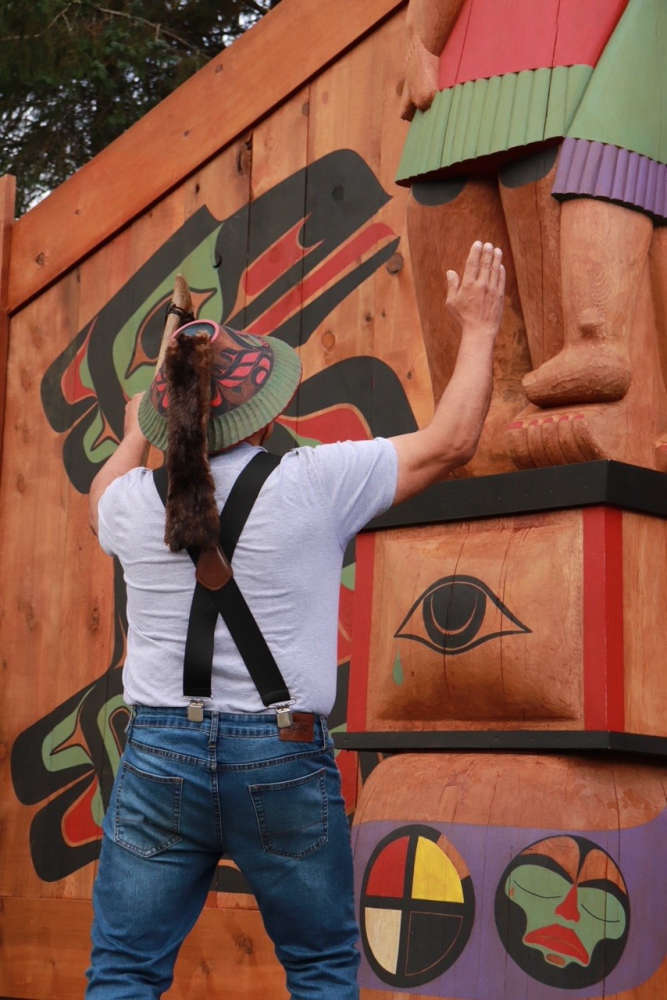