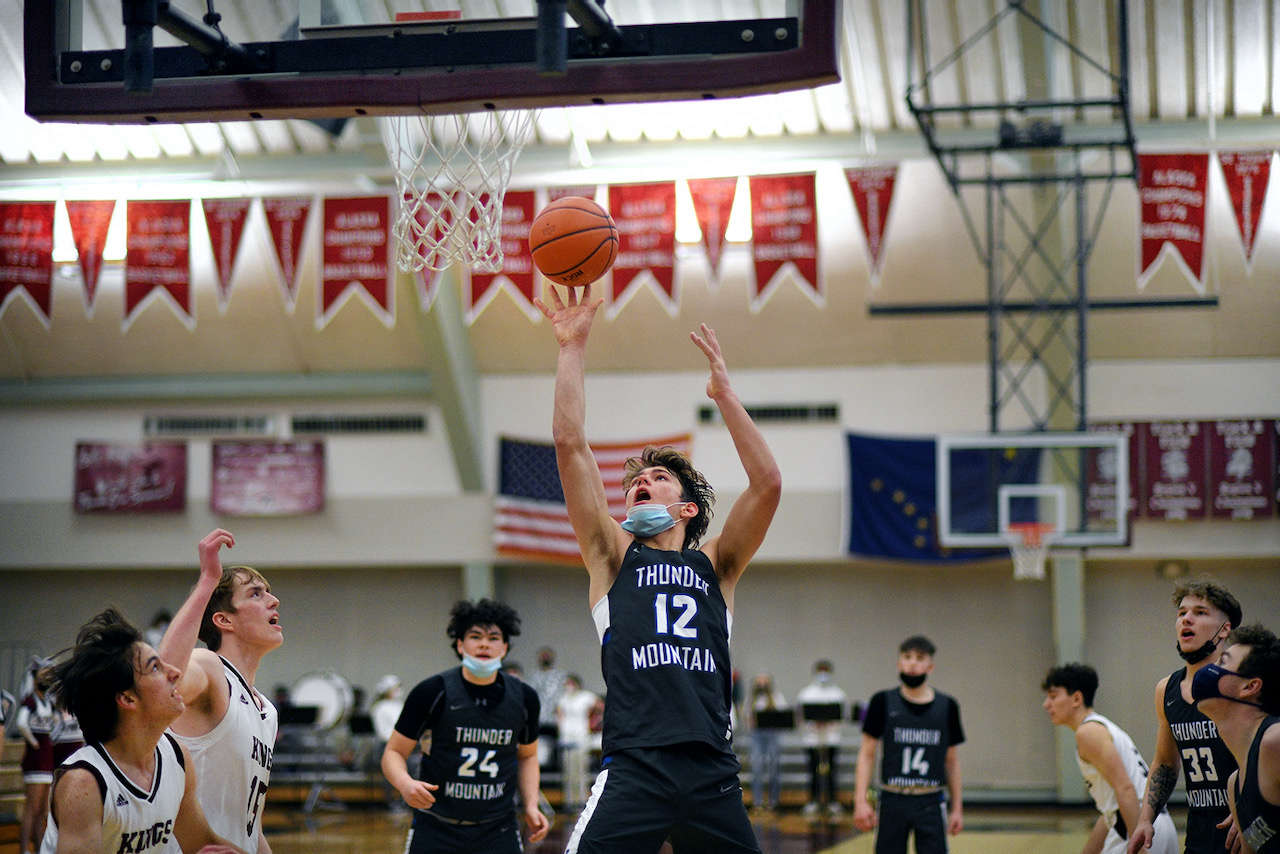 TMHS senior Wallace Adams is shown in last week's action against Ketchikan. Adams was noted for his defense and rebounding against Palmer in the Falcons win on Thursday night. (photo-Dustin Safranek/Ketchikan Daily News)

“It was a little rough in the first half,” Lockhart said of his shooting. “But I saw it go through once and that was all I really needed. I got it going and couldn’t miss. It was really exciting. I knew my team wanted me to shoot all those, they trust me to shoot those and make them. I just did my job and shot those.”

Thunder Mountain trailed 52-40 with 2:37 left in the fourth quarter when the Falcons started their victory run.

“We’re trying to scare Blasco over in Juneau,” Thunder Mountain assistant coach Matt Seymour, who is filling in for head coach John Blasco, said. “He was texting me the whole game.”

Falcons senior Wallace Adams hit two free-throws to cut the lead to 10. It also gave the Falcons a chance to stop the clock and set up their defense.

The Falcons pressed for a steal, fed Lockhart and he buried a deep shot to trail 52-45 with 2:32 remaining.

“When you have shooters that can hit three’s you are never out of the game,” Seymour said. “So luckily we got Sam.”

A couple turnovers by both sides and Lockhart found the ball and nailed another long distance shot to trail 52-48 with 1:37 left.

Palmer senior Arin Mathis put a shot up inside to give the Moose a 54-48 lead with 1:29 left but the Falcons worked the ball to Lockhart on a catch-and-shoot and he hit all net from deep again to trail 54-51 with 1:07 left.

Thunder Mountain’s Baxter stole a pass and drove to the hoop, drawing a basket and a foul and hitting the extra shot to tie the score at 54-54 with 1:03 left.

“Really I am just doing what I can to help the team,” Baxter said. “If I can take out one of their best defenders because they know I can score the ball and they put him on me then it helps my other teammates score the ball. Today we played really well in the second half as a team and I just felt like it was all of us together playing defense. We played really well as a team. My teammates do a really good job of helping me get open. They set a lot of screens and we played pretty well together today.”

Palmer worked the ball for a last shot but instead turned the ball over and Thunder Mountain moved the ball to Nierra in the deep corner wing and he hit a jumper with two seconds left for a 57-54 advantage and the Falcons first lead of the game.

Palmer had one last shot but the Thunder Mountain pressure kept the ball from reaching the rim.

“A lot of the guys didn’t show up on the stat sheet,” Seymour said. “MJ (Tupou) had some great screens, he was trying to get Thomas and Sam open. I think a lot of that has to go to him just by working so hard to get them open.”

Tupou, a junior, seemed to do his job as Baxter led the Falcons with 20 points and Lockhart added 19. Lockhart had five shots past the arch, Baxter three and Nierra two.

“It was a team effort trying to get them open,” Seymour said. “And get them good looks. And obviously Lance with that three at the end, I’m proud of him. Just kind of resilience going down the stretch. That’s the kind of stuff I like to see. I was proud of them for sticking with it. Even when we were down 12 you could tell the morale was still good, we didn’t think we were out of it. Then we hit some shots down the stretch and got some turnovers in our press.”

Adams picked up eight rebounds and four steals in the game.

“Wallace does all that intangible stuff,” Seymour said. “He works hard on the boards and he will definitely get in the passing lanes when we need it. He is great at grabbing those 50-50 balls and making it an 80-20 ball for him. I think a lot of credit has to go to our defensive side we were very active working to get in the passing lanes.”

“The game plan was mostly to try and play our game,” Seymour said. “We’ve been off for so long but we wanted to build on some of our successes. Limiting our turnovers as much as possible and then trying to get good stops.”

Baxter hit the first basket of the fourth quarter from deep to cut the lead to 43-40 but Palmer seniors Kale Galliher, Tyler Hansen and Arin Mathis pushed the score up to a 52-40 advantage with 2:37 left to play and put an apparent win in the books. Something the Falcons definitely did not read.

“We have a lot of fight in us,” Baxter said. “We love playing defense. We are not very big. We are very scrappy.”

Baxter said he has learned a lot from Adams.

“To just have a dog mentality,” Baxter said. “Always getting on the floor. Always talking. The team needs leaders, leading helps us win games. Wallace has done a really good job of helping us grow as young men. We’re pretty young and Wallace has done a great job of leading us this year and he is making that my role too. I am starting to be more of a leader and Sam is being more of a leader… we are starting to lead as a whole.”

The Falcons continue tournament play against West Valley on Friday and Nome on Saturday.