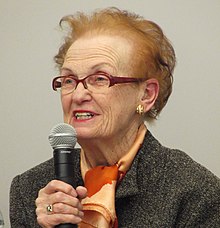 Katie Hurley speaking at the University of Alaska Fairbanks in March 2013, part of a panel discussion on the history of the Alaska Legislature.

Juneau, Alaska (KINY) - Juneau's Katie Hurley has passed at the age of 99.

She passed on Sunday, according to Juneau lawmakers.

She was born in Juneau on March 30, 1921, and became known as the "Grand Dame of Alaska politics", according to Juneau Senator Jesse Kiehl who remembered her on the Senate floor Monday.

Hurley began her political career in 1944 as an assistant to Territorial Governor Ernest Gruening and served him until he left office in 1953.

She served as chief secretary to the Alaska Constitutional Convention and spent five terms as the Secretary for the Alaska State Senate.

After moving to Wasila in 1963, Hurley represented the town in the state House of Representatives from 1985 to 1986.

Hurley was the first woman to seek and win statewide office in Alaska when she ran for lieutenant governor in 1978 with Democrat Gubernatorial Candidate Chancey Croft.

She was inducted into the Alaska Women's Hall of Fame in 2008.

Governor Dunlevy has ordered flags to fly at half-staff on Tuesday, March 30 which would have been Hurley's 100th birthday.