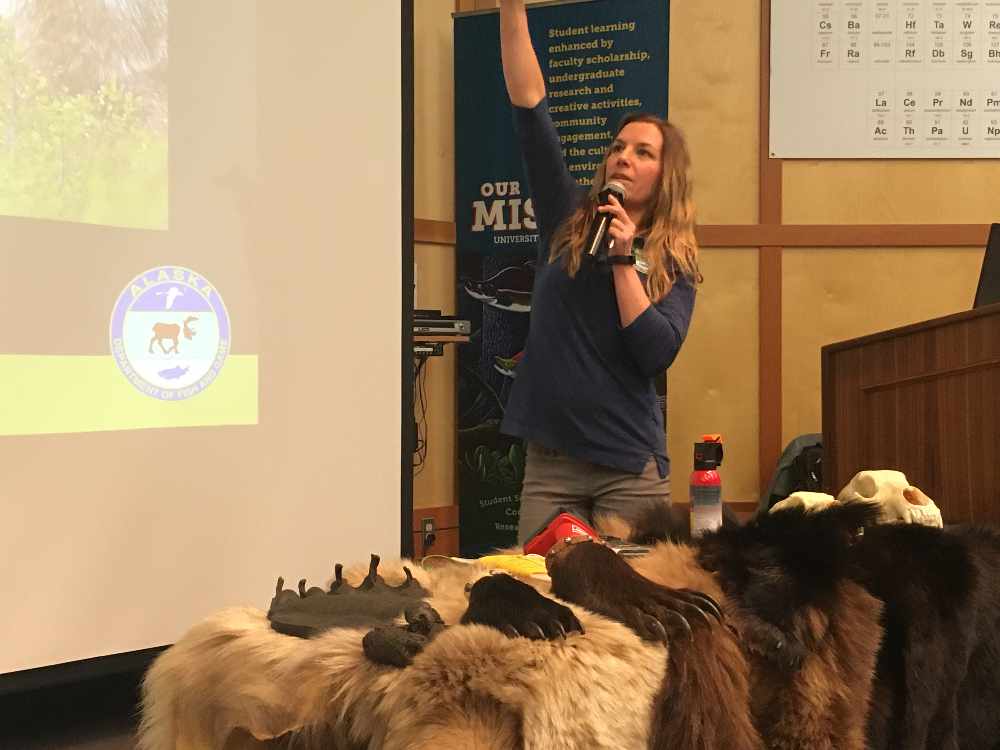 Juneau, Alaska (KINY) - Abby McAllister, Wildlife Education and Outreach Coordinator, for the Alaska Department of Fish and Game Division of Wildlife Conservation was the featured speaker.

McAllister said the goal of her speech was to increase overall knowledge of wildlife and wildlife safety, help people mitigate risks in bear and wolf country, and get people outside for the big benefits for physical and mental health.

The polar bear, the brown bear, and the black bear inhabit Alaska.  While it is unlikely you will see a brown bear in town, the chances increase as you head out of town.

"Brown bears and black bears may react differently to an encounter.  Black bears often flee and escape.  Brown bears are more likely to stand their ground."

Bears can be all different shades and sometimes it is difficult to tell what kind of bear you have encountered.

Brown bears will always, most often anyway, have a large hump on their shoulder.  The brown bear also has larger paws and larger claws.  Brown bears will have dish-like faces while black bears have more of a flat and narrow face with smaller perky ears.

The best thing Juneau residents can do to avoid encounters is to remove attractants to bears.

Other tips are make noise, use bells and whistles, and talking.  They identify yourself to a bear.  "Think of it as ringing a doorbell for bears.  You are coming into their home. By using your voice you are announcing your presence."

Hikers should move cautiously, especially along creeks, on blind corners and in heavily vegetated areas.  Travel in a group.  Data shows your chances of encountering a bear while in a group drop considerably.  Always carry bear spray, know how to use it, and have it handy.

About 50% of human encounters with bears involving those armed with a gun, resulted in injury to the human.

It is recommended to leash your pet or leave it at home.  Another tip is to stay aware, use your senses, and never use headphones in the woods.

Other tips are to stay calm, don't panic and never run for a bear.  If the bear doesn't notice you move away quietly.    If you do see a bear let other hikers know.

Campers should avoid bear trails and areas where fish waste has been left behind.  Also don't camp in narrow beaches.   It is important to store food and cook food in separate areas from where you sleep.  Pay attention to the direction of the wind and make sure the odors from the food are headed away from where you are sleeping.

There is a growing mountain biking community in Juneau.  McAllister said mountain bikers should watch for bear signs, avoid trails near salmon streams, ride in groups and use a noisemaker on your bike.

Fish and Game biologists said that a vast number of bear nuisance calls would go away if garbage was not kept outside.

In 2019 Fish and Game responded to 160 bear nuisance calls, and Juneau police just under 200 calls.  While salmon runs were down there was an abundant berry crop this year.

In 2018 there were a total of nearly 900 calls in Juneau with Fish and Game responding to close to 375 and police 525.  Most of these were bears getting into attractants.

McAllister said there also has been an increase in moose reports in Juneau.  They are far more unpredictable than bears.  They are the most dangerous in the spring when cows have new offspring.  Two people were killed by moose attacks in Anchorage.  The hair stands up on the back of the head of a moose when they are afraid.  It is important to place a large object between yourself and a charging moose.

You can be loud and throw rocks and sticks to scare off a wolf.