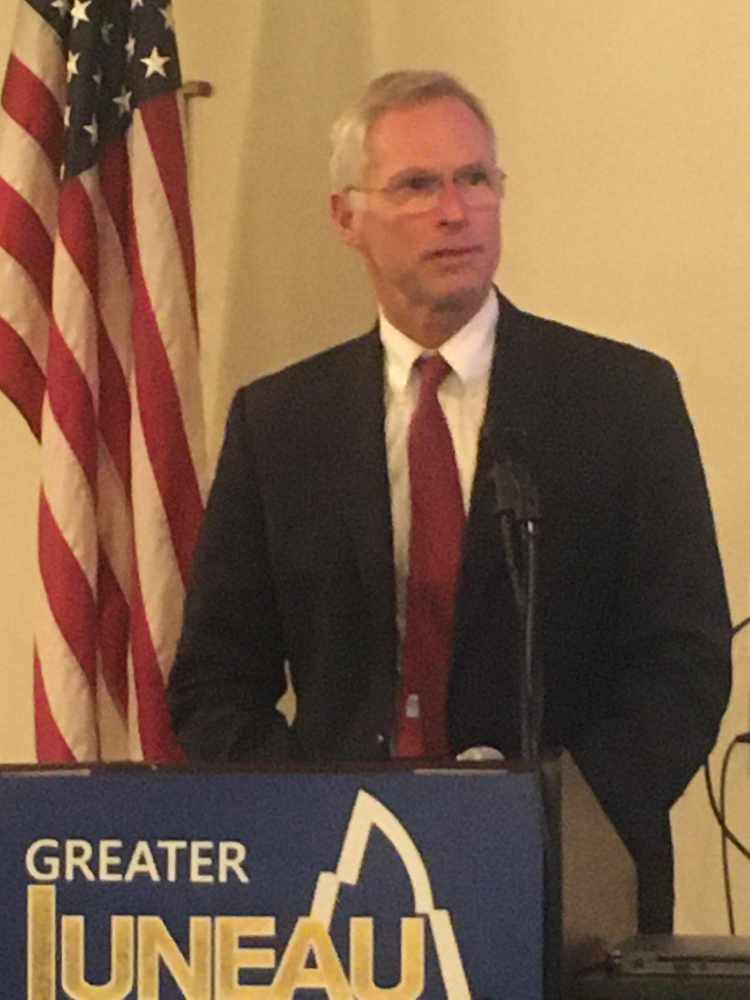 Juneau, Alaska (KINY) - Jim Johnsen spoke on budget negotiations, changes in leadership at UAS, and the future of the University system.

The speech began with some remarks from UAS Chancellor Rick Caulfield.  He recently announced his retirement at the end of the academic year.  He said UAS is working hard to work through the budget challenges.  "We take pride at UAS that no student is a number.  Our students know their advisors and professors.  Our faculty and staff work hard to create a supportive environment for learning."

UAS received accreditation from the Northwest Commission on Universities earlier this year.  Without accreditation they could not offer credits, degrees, or be eligible for federal student aid programs.

"I'm proud of what we have accomplished at UAS.  There will be a thorough search for a new Chancellor with active engagement with our students, staff and our community members."

University President Jim Johnsen praised Caulfield as a passionate advocate for education in Southeast.  He said a national search firm is on board to find a successor for Caulfield.  In two weeks the firm will meet with faculty, staff, and students for what they are looking for in the future at UAS.

Johnsen has been at the centerpiece of the state budget in the past year.   The Governor proposed a 41% cut in the University budget.  The state provides about 40% of the total University budget.  He spoke on the challenges of delivering services to such a large state.  He also spoke on the pride he has in all of their outstanding programs in research, programs for indigenous programs and their award-winning teachers.

Johnsen noted they have raised $100 million from private sources in the past few years to support their programs.

He spoke about the impacts the budget battle has this year.

He said there have been defections in quality staff and in students going out of state.  He noted the University suffered a three notch downgrade in their credit rating.

He said the UA strong campaign really helped them as they worked with the legislature on the budget cuts.  They negotiated an agreement with the Governor for funding over the next three years.    "It really benefited the University to get into that agreement.  If we didn't go into it the cumulative cut would have been $405 million.  We brought that down the cumulative cut to $145 million."

Johnsen said they still have to make very difficult decisions.  He said one national expert told him the University went from an impossible situation to a very difficult situation.

"Despite all these shots and the negativity, it is an opportunity for us to come together as Alaskans to solve these issues."

Another priority is growing the University land grant.

The Juneau Radio Center promoted the Caring is Sharing food drive.   The event is underway today..  36,000 pounds were donated last year.  The goal for this year is 40,000 pounds of food.

Donors can drop off non-perishable food items at Foodland IGA and Super Bear from 6 am until 6 pm.