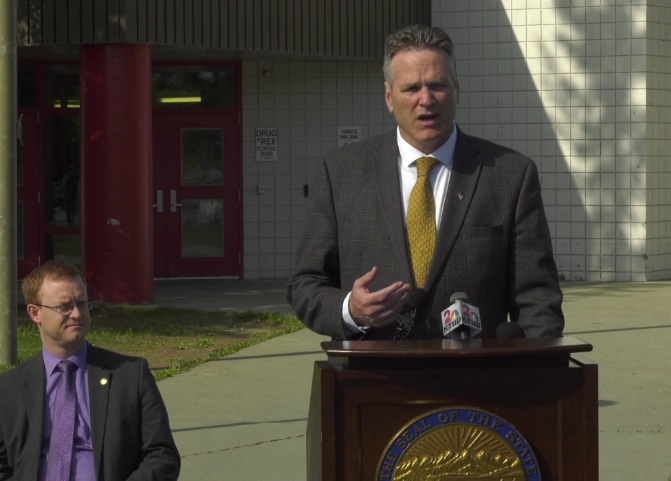 The amount expected to be paid this fall is unresolved as lawmakers grapple with how the Alaska Permanent Fund dividend program should look going forward.

To Dunleavy, it's simple: follow a longstanding calculation in law, which would equate to checks of around $3,000 each, and send to a vote of the people proposed changes to the dividend.

He told reporters Friday he's determined to get a full dividend this year, even if that means repeated special sessions. He spoke in his hometown of Wasilla, outside a middle school, his recommended venue for a July special session.

A governor can call a special session, but legislators don't have to act on any of the agenda items. Dunleavy's predecessor, Gov. Bill Walker, found that out when he repeatedly asked lawmakers to consider taxes to help address the state's budget deficit.

Legislators also can call themselves into a special session. In 2015, they snubbed Walker's call to meet in Juneau by holding their own special session in Anchorage.

Some legislators hope a legislative working group can provide a path forward on dividends. Others are skeptical.

House Speaker Bryce Edgmon said he thinks the group's eventual recommendations will be seriously considered. The Dillingham independent said many legislators believe that if they want to put a longer-term solution, they have to deal with it this year.

"To do it next year, in an election year, I think would be virtually impossible," he said.

Soldotna Republican Sen. Peter Micciche said a durable solution "is unlikely to be delivered without a serious formal consideration on how the people of Alaska feel about a change." Micciche also noted Dunleavy can veto bills he doesn't like. Lawmakers have the option of overriding a veto if they can muster sufficient votes.

During a just-ended special session, the Senate by one vote failed to pass a full dividend, with a prominent supporter absent. It later failed to revive the bill for another vote.

The Senate included a full payout in its version of the operating budget. Senate President Cathy Giessel has said members of her GOP-led majority have expressed willingness to support a full dividend this year if it's coupled with changes going forward.

The House soundly rejected a full payout. But minority Republicans, who pushed for one as part of the debate on a state infrastructure budget, refused to offer the necessary support for key funding provisions for that budget, leaving that, too, unresolved.

Dunleavy said if the dividend is resolved, he thinks that budget can come together quickly.

"There's lots of compromises that could be out there. But they're compromises, and if everybody stays hardened in their positions, we'll never get to that," he said.

Wielechowski has argued the debate isn't complete without looking at things such as oil-tax changes. Dunleavy sees room to reduce the operating budget, which he told reporters recently needs to be smaller.

In 2016, Walker reduced the amount available for the checks, an action upheld by the state Supreme Court after Wielechowski and others sued.

The court's decision said the dividend absent a constitutional amendment must compete for funding like other state programs. Checks the last two years have been capped at $1,100 and $1,600.

Some legislators, frustrated by what they see as arbitrarily picking check sizes, argue the existing calculation should be followed. The earnings reserve was valued at $19 billion at the end of April.

But some worry the Legislature, which spent billions in savings as it struggled to address the deficit, will use the earnings reserve as a piggy bank. Last year, lawmakers began using fund earnings, long used to pay dividends, to help cover government costs. A law passed last year seeks to limit withdrawals from earnings for dividends and government. Whether lawmakers adhere to that limit remains unclear.

"Hopefully the public's seeing the urgency of the need to revisit the formula, because there's only so much cash," said Senate Finance Committee Co-chair Sen. Bert Stedman, a Sitka Republican. He said he's concerned that Alaskans have been "led to believe that we can just spend out of the earnings reserve and not worry about it."