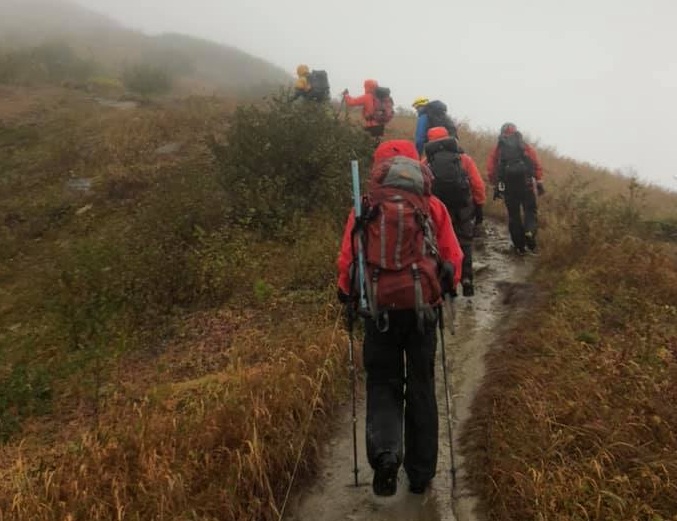 Juneau, Alaska (KINY) - A hiker was successfully rescued off Gastineau Peak on Friday after being stranded overnight.

A Juneau Mountain Rescue team rescued a hiker who was stranded on Mount Roberts.

The extraction was from steep terrain according to the US Coast Guard, which sent a helicopter from Sitka to aid in the rescue effort.

According to AST, at about 6 p.m. on Thursday, 26-year-old Andrew Tse of New York reported he had become lost while hiking above the Mt. Roberts Tram in Juneau and fell down a portion of the mountain and sustained minor injuries.

"Tse was unable to self-rescue and after discussion with the Trooper was able to provide his GPS location from his cell phone," Troopers stated. "The coordinates provided by Tse revealed he was located in the area of Snowslide Creek west of Gastineau Peak at about 2,700 feet. The Juneau Mountain Rescue and Alaska SEADogs were activated by AST and responded to assist with locating and rescuing Tse."

Additionally, the USCG was contacted and responded with a helicopter to assist. However, due to deteriorating weather conditions and darkness, the rescuers and helicopter were not able to get to his location and Tse spent the night on the side of the mountain. Tse was not dressed for the elements nor did he have any survival gear with him.

On Friday, members of Sitka Mountain Rescue were transported to Juneau by the United States Coast Guard. The USCG was not able to offer any additional support due to the weather conditions.

Through a collaborative effort managed by the Troopers, Tse was successfully rescued by ground personnel with Juneau Mountain Rescue, Sitka Mountain Rescue, and Capital City Fire and Rescue.